HOUSTON — (July 11, 2018) — Neither scorching temperatures nor vacation plans could stop homebuyers from pushing the Houston real estate market into record territory in June, as they generated the greatest one-month sales volume of all time and sent average and median prices to new highs. Single-family home rentals were also in strong demand.

According to the latest monthly report from the Houston Association of REALTORS® (HAR), 8,518 single-family homes sold in June compared to the last record high of 8,367 homes exactly one year earlier. That represents a 1.8 percent increase.

The single-family home median price (the figure at which half of the homes sold for more and half sold for less) rose 2.6 percent to $245,000 and the average price climbed 4.3 percent to $316,463. Those prices broke records set just last month and are the result of strong activity in the luxury market – homes priced at $750,000 and above – which saw an 18.4 percent year-over-year jump in sales volume.

“If there were concerns about rising home prices in the Houston market, you wouldn’t know it from all the homebuying that took place in June,” said HAR Chair Kenya Burrell-VanWormer with JPMorgan Chase. “We continue to outperform last year’s record pace of home sales, but we’ll keep a close eye on inventory levels in the weeks ahead to ensure they are meeting demand.”

June sales of all property types broke the 10,000-mark for the first time in history, totaling 10,115. That represents an increase of 1.7 percent versus the same month last year. Total dollar volume was up 6.6 percent, reaching more than $3 billion. 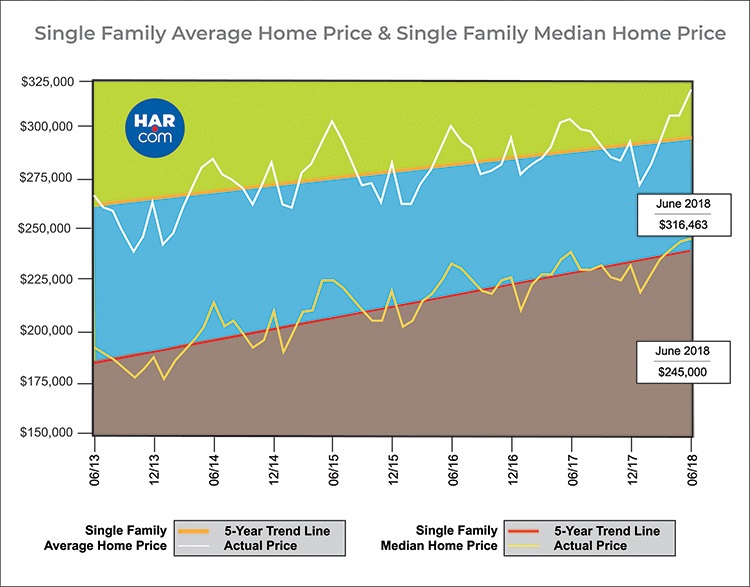 Single-family home sales rose 1.8 percent in June with 8,518 units sold across the greater Houston area compared to 8,367 a year earlier. That is the greatest one-month sales volume of all time. On a year-to-date basis, home sales are 2.6 percent ahead of 2017’s record pace. Prices reached historic highs in June. The median price increased 2.6 percent to $245,000. The average price rose 4.3 percent to $316,463. 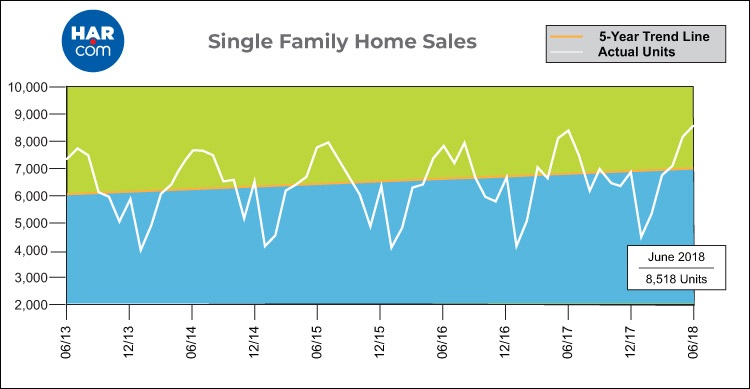 Days on Market (DOM), or the number of days it took the average home to sell, declined from 50 to 48 days. Inventory registered a 4.1-months supply which is its highest level since August 2017 and equal to the current national inventory level reported by NAR. Broken out by housing segment, June sales performed as follows:

HAR also breaks out the sales figures for existing single-family homes. Existing home sales totaled 7,186 in June, up 1.2 percent versus the same month last year. The average sales price increased 4.1 percent to $305,583 while the median sales price rose 4.4 percent to $235,000.

After a 7.2 percent decline in May, sales of townhomes and condominiums turned around in June, increasing 4.9 percent with 709 units sold versus 676 a year earlier. The average price fell 1.7 percent to $211,050 while the median price dropped 4.1 percent to $163,000. Inventory was unchanged at a 4.2-months supply.

The above information provided courtesy of Houston Association of Realtors®.  The original press release can be viewed at Har.com.