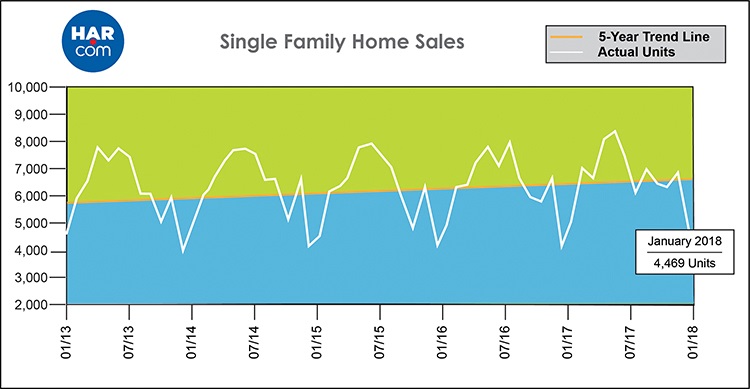 HOUSTON — (February 14, 2018) — The Houston real estate market kicked off the new year in generally positive territory, with sales up, a mixed pricing performance and a stable supply of homes available to buyers in January.

Overall sales of single-family homes rose 8.9 percent, according to the latest monthly report from the Houston Association of Realtors (HAR). However, January marked the third consecutive month of declining sales among luxury homes – those priced at $750,000 and above. The strongest sales performance took place among homes in the $250,000 to $500,000 range. Housing inventory was unchanged from the 3.3-months supply a year earlier, in January 2017.

The single-family home median price (the figure at which half of the homes sold for more and half sold for less) rose 3.8 percent to $218,000 – the highest median ever for a January. The average price declined 2.1 percent to $270,303.

"The Houston housing market seems to have carried the positive momentum from 2017 into the new year, even with some softening in the high end," said HAR Chair Kenya Burrell-VanWormer with JP Morgan Chase. “We hope to sustain that positive momentum with 28,000 new homes slated for construction this year, according to Metrostudy, as well as healthy gains in employment.” In the February edition of its Economy at a Glance publication, the Greater Houston Partnership (GHP) reported the creation of 46,000 jobs across greater Houston in 2017 – with more Houstonians finding employment last year than in 2016.

January sales of all property types in Houston totaled 5,468, an increase of 8.7 percent versus the same month last year. Total dollar volume climbed 6.3 percent to $1.4 billion.

Consumers showed different degrees of interest in lease properties across the Houston area in January. Single-family home leases rose 1.9 percent while leases of townhomes and condominiums fell 5.3 percent. The average rent for single-family homes was up 1.4 percent to $1,748 while the average rent for townhomes and condominiums edged up 1.3 percent to $1,516.

Single-family homes inventory was flat at a 3.3-months supply. For perspective, housing inventory across the U.S. currently stands at a 3.2-months supply, according to the latest report from the National Association of Realtors (NAR).

Coming off the holidays – a traditionally sluggish time of year for real estate – single-family home sales rose in January, with 4,469 units sold. That is up 8.9 percent from January 2017 when sales volume totaled 4,104.

Days on Market (DOM), or the number of days it took the average home to sell, increased slightly from 65 to 67 days. Inventory held steady year-over-year with a 3.3-months supply.

Broken out by housing segment, January sales performed as follows:

HAR also breaks out the sales figures for existing single-family homes. Existing home sales totaled 3,723 in January, up 9.4 percent versus the same month last year. The average sales price decreased 0.8 percent to $257,975 while the median sales price rose 5.2 percent to $204,995.

Market Report Courtesy of the Houston Association of REALTORS®

The computerized Multiple Listing Service of the Houston Association of REALTORS® includes residential properties and new homes listed by 37,000 REALTORS® throughout Harris, Fort Bend and Montgomery counties, as well as parts of Brazoria, Galveston, Waller and Wharton counties. Residential home sales statistics as well as listing information for more than 50,000 properties may be found on the Internet at http://www.har.com.

The MLS does not verify the information provided and disclaims any responsibility for its accuracy. All data is preliminary and subject to change. Monthly sales figures reported since November 1998 includes a statistical estimation to account for late entries. Twelve-month totals may vary from actual end-of-year figures. (Single-family detached homes were broken out separately in monthly figures beginning February 1988.)

Founded in 1918, the Houston Association of REALTORS® (HAR) is a 37,000-member organization of real estate professionals engaged in every aspect of the industry, including residential and commercial sales and leasing, appraisal, property management and counseling. It is the largest individual dues-paying membership trade association in Houston as well as the second largest local association/board of REALTORS® in the United States.